A History of Gurdwaras in Britain: Guru Nanak Prakash, Coventry
First mention of Guru Nanak Parkash Gurdwara, Coventry, found so far appears in 3rd September 1963. It’s a report of the proposal of a development at Harnall Lane West and Little Church Street in the City of Coventry being made the day before, on 2nd September 1963.[1] The development was to be situated at the rear of land formerly forming the site of Nos. 77, 79 and 81 Harnall Lane West, would take up 15,000 sq ft and cost £10,000 (roughly £210,000 today according to the Bank of England's infalation calculator). The estimate had come from Mr. J. L Glover, a partner in the architect firm of J. Roland Sidwell and Partners.[2] The contractor was J. O'Neill.[3] The proposal, put forward by the “Sikh Gurdwara (Coventry) Committee” stated that the;  “building shall include a kitchen for the preparation of sacramental meals; sleeping accommodation for wayfarers who are entitled to demand hospitality; stalls for shoes; and a marriage room.”[4] The costs, which increased to around £12,000 (roughly £240,000 today according to the Bank of England's infalation calculator), was raised by monthly contributions of £100 or more by 300 to 400 local Sikh families. The foundation stone was laid on Sunday, 5th September 1965.[5] Interestingly, it’s also noted that, “there was to be a "carved marble panel depicting Guru Dev... to the order of a Coventry stonemason."[6] Although born and bred in Coventry, having visited the Gurdwara in question on numerous occassions I’ve never seen this marble sculpture. In fact, when first reading some of the research material I thought the reporter had made a mistake. Fortunately, as I continued to research a photograph emerged.

Coventry Evening Telegraph - Friday 10 December 1965 Furthermore, "a teacher at the Coventry College of Art, Mr Stanley Cliffe, of Leamington is completing two oil paintings, each 6ft by 3ft, 6in, for the inside of the temple. One depicts Guru Dev and the second is a traditional religious subject."[7] These two paintings, I believe, are now situated in the Darbar on the third floor of the Gurdwara.

Although the initial reports include errors, such as ‘Guru Dev’ when referring to Guru Nanak Dev Ji, or temple instead of Gurdwara, the reports in 1965 make fewer of these mistakes. 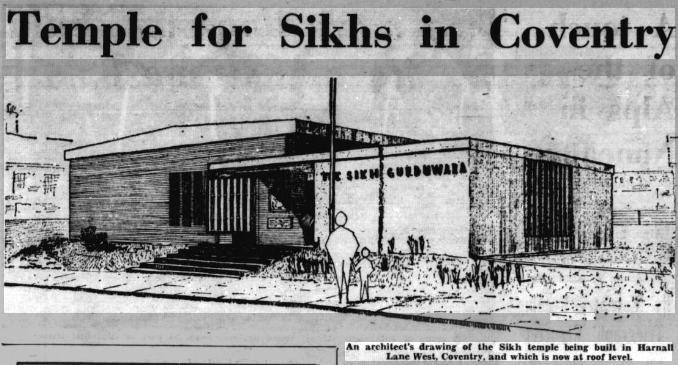 Coventry Evening Telegraph - Friday 10 December 1965 In December 1965 it was perceived that the building would be finished in January or February of the following year, 1966.[8] The long term plan being put forward by the chairman of the soon to be constructed Gurdwara: “Mr. Prem Singh, of Charterhouse Road, Coventry, said, ‘We are arranging to buy a piece of land adjoining the temple site. There we hope to build a house for the priest, with a room to accommodate travellers, in accordance with our beliefs. Also, we need a community centre where we can meet to talk and dance. This is among our long term plans.’” The Gurdwara was set to be opened on May 29th 1966 but a racist attack on 8th May 1966 worried many that the opening would be delayed. "Only a few yards from a row of police houses, but the vandals struck at about 4a.m. yesterday, smashing 18 blue glass windows and daubing swastikas in black paint over the doors, walls and windows.[9] The vandalism was discovered by, “Mr. John O'Neill, the contractor on the building, who found that the black paint of the swastikas was not yet dry."[10] O’Neil estimated the cost to fix the damage would amount to £200 and the repairs began immediately with the hope to finish by Friday, with the hope of still being able to open on May 29th. 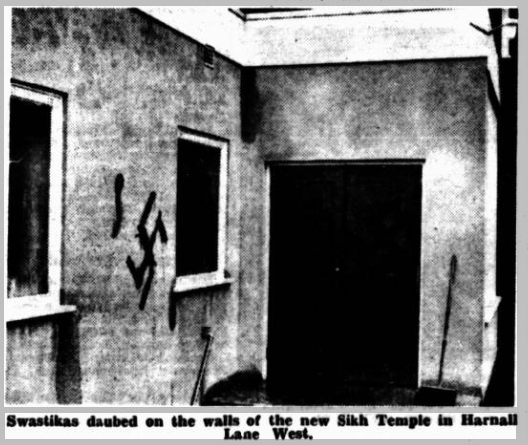 Coventry Evening Telegraph, Monday 9th May, 1966 The attack spurned the IWA to contact the Home Secretary for strong anti-discrimination laws.[11] It did nothing to stop the opening of the Gurdwara on May 29th, 1966. However, the date itself was certainly eventful. Locals as well as Sikhs from 14 different towns who had travelled to witness the opening of the new Gurdwara and the event was also attended by the Lord Mayor of Coventry, Alderman E. M Rogers. An hour after it opened, a bomb threat ensured the police were called. Not adhering to requests to remove their boots before entering the room housing the Sri Guru Granth Sahib Ji, the police,  led by Inspector R. Massey, evacuated the 500 or so people who had gathered at the Gurdwara.[12] The police then searched the building, found no bomb and allowed everyone to re-enter. "The secretary and priest of the new temple, Mr Giani Naunihal Singh, insisted on staying in the building while it was searched as he felt he could not leave his holy book, the Granth Sahib, there untended."[13] 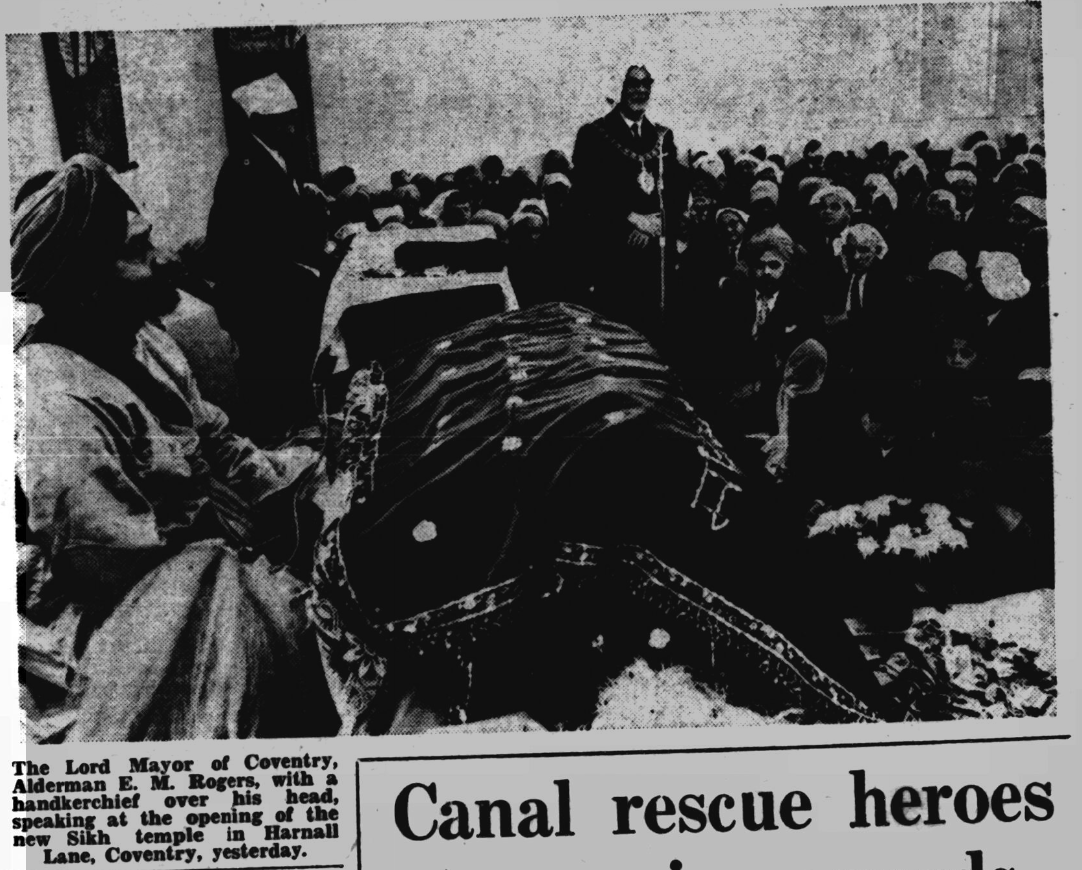 “The new temple will have religious ceremonies every Sunday. Marriages will be conducted there after the couple have visited the Register Office. There will also be classes in English and Punjabi and a special day set aside weekly for Indian women. Three thousand books have already been ordered for a library." [15]